Gun-ownership wouldn’t have prevented the Holocaust

28 November 2013 by Jan Huisman in News Scrutinized - No Comments 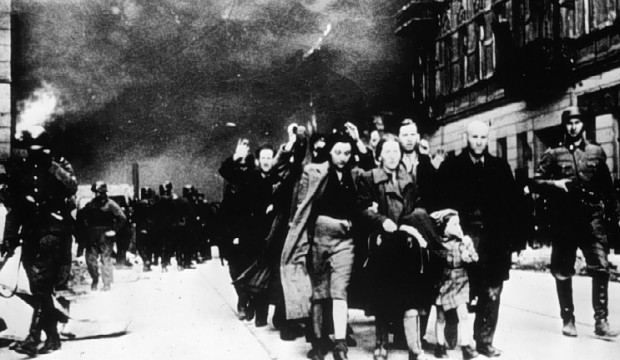 American historian Stephen Halbrook states on the History News Network that Jewish gun-ownership could have prevented the violent outburst against Jews during the Kristallnacht. He states that a gun law facilitated the unprecedented violence of the nazi’s –  a law that was created in the last year of the democratic Weimar-Republic in 1932. According to this law, all gun owners in Germany were registered, making it all the easier for the nazis to collect them a couple of years later.

On November 9th,1938, Jews were attacked throughout Germany. Their shops and homes were destroyed and thousands were carried of to prison camps. The Kristallnacht marked the beginning of the Holocaust. The 57th anniversary of the ‘night of broken glass was remembered earlier this month. But how was it actually possible to attack the Jews on such a large-scale? Why weren’t they able to defend themselves?

Halbrook explains how this gun registration helped the nazi’s as they took power. They knew exactly who owned guns and they started to disarm all potentially ‘enemies of the state’. This culminated in 1938, as all Jews were ordered to surrender their guns. Halbrook suggests that this had a major impact on the Kristallnacht and the Holocaust: because Jews weren’t able to shoot at their assailants, they couldn’t defend themselves and the Holocaust was inevitable. Hallbrook imagines how Jews in concentration camps “.. have second thoughts on whether they should have registered his handguns in 1932? Or whether they should have obediently surrendered the guns at a Berlin police station in 1938 as ordered by Nazi decree? Did they fantasize about shooting Nazis?”

Although it seems obvious that Jews would be better able to defend themselves if they had some armament, I think some historical context is missing in this argumentation. We have to remember that the Jews in 1938 didn’t have our knowledge. The nazis committed brutal crimes against them, but also did their best to make them believe they could hope for a better world. Indeed, it is even questionable if the Germans planned the Holocaust as early as 1938. So even if Jews had all their guns, it remains to be seen if they would have used all their arms against the nazis. More likely, some would and wouldn’t have taken this course of action. And even then, to resist the full power of the German state would seem hopeless.

Hallbrook is obviously a supporter of gun ownership. He explains how the reaffirming of the Second Amendment in America is directly connected to the Kristallnacht. At the outbreak of the Second World War, the American congress passed a law prohibiting the registration of firearms, reaffirming the right to bear arms. Hallbrooks suggests that the right to defend oneself guarantees a defense against the excesses f a totalitarian state. The horrors of “Hitler’s Germany, or for that matter Stalin’s Russia or Pol Pot’s Cambodia, could be averted, regarding Hallbrook. Today it may be thought of as progressive to prohibit fire-arm possession, but as far as Hallbrook is concerned, the situation in Germany today resembles that of the Weimar-republic in 1932: Fire arms are registered by a democratic government.

Hallbrook’s theory is a typical example of a teleological view on history. He uses a certain event in history to proof a point. But history never repeats itself and one cannot compare the circumstances of nazi-germany with our society today, simply because we don’t know all the circumstances. Moreover, fire-arms are just tools, used by the government. Today our government uses a wider pallet of tools, with computer-intelligence, electronic eavesdropping, etc. I think one should always be cautious to lessen the legal limitations of a state. But I also think one should never more use a historical event as proof for a political issue. This accounts even more so for the Holocaust, as its gruesome history has such an immediate impact on our perception. In a political discussion, our arguments have to account for the present situation.

Archaeological proof: Cyprus has been inhabited for 10.000 years