Could tattoos hold the key to deciphering the long lost language of the Indus Valley culture? 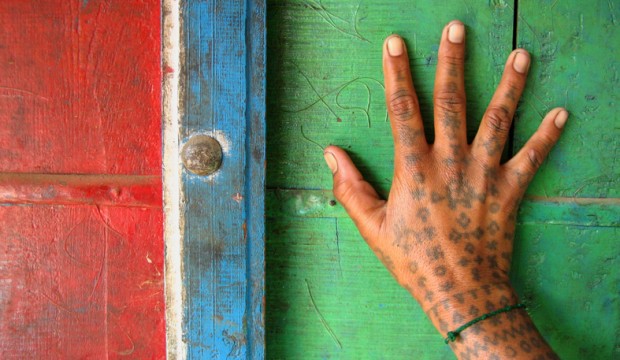 Women of the Rabari and Bharwad communities, nomadic tribes living in the Indian state of Gujarat, are known for the elaborate tattoos they wear on their faces, arms and legs. The tattoos represent characteristics such as fertility or acquired skills. New research indicates that these tattoos closely resemble symbols used in the Indus Valley script, with some even being identical, and might therefore hold the key to deciphering this script. Shahida Ansari, who conducted research among the tribal groups near the former Indus Valley site of Kanmer, states that it is possible that the symbols got carried forward from the time of the Indus Valley culture down the generations with the same or different meanings.

The Indus Valley culture is one of the world’s first great urban civilizations. It existed 5000-3000 years ago in what is now Pakistan and western India at around the same time as the early city states of Mesopotamia and Egypt.The culture covered a vast geographical area, twice the size of that controlled by Mesopotamia or Egypt. Excavations of Indus Valley culture have revealed well planned cities and towns with may two-storied houses with bathrooms supplied with water from the neighbourhood well, all connected to an elaborate drainage system, a feature which is still not universally available in present day India and Pakistan. Combined with a highly standardized system of weights used to control trade and impose taxes this indicates a highly complex and sophisticated civilization with a well-organized civic authority.

It was only in the 1920s that it was recognized that the remains of the cities and villages found in the floodplain of the Indus river belonged to a sophisticated unknown civilization. Much of the Indus Valley civilization still remains shrouded in mystery, amongst which its script. Most of the inscriptions found are very short. The absence of longer texts, which may have been written on perishable material such as cotton, and might well have been lost and bi-langual texts, as the Rosetta Stone, have made it impossible so far to decipher the script.

Edited version of Hitler's Mein Kampf is still to be published