21 April 2014 by Jan Huisman in Biography Modern - No Comments 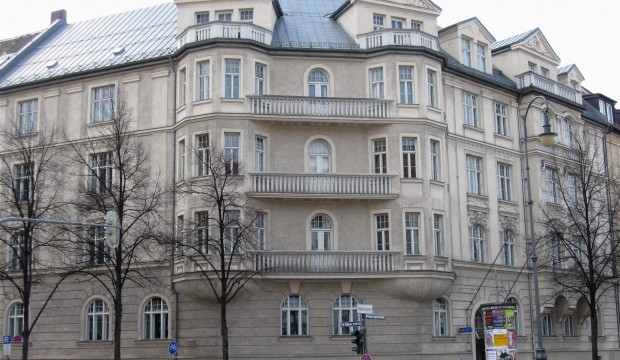 Edgar Feuchtwanger lived in Munich, Germany, during the rise and heydays of the nazi-regime, from the early 1930’s to the outbreak of the war in 1939. Munich was the beating heart of the nazi-movement and the Feuchtwanger family was Jewish. To make things worse, the family had an infamous neighbour, none other than the Führer himself, Adolf Hitler. Feuchtwanger survived the war and lives in England. He is 89 years old and dictated his diaries.

The oldest remembrance of Feuchtwanger to Hitler is connected to dairy. “I remember that my mother said: ‘ Today, we have not much milk. The milkman said he needs to give more milk to Hitler. . ‘. This is the first time Feuchtwanger, aged 5, heard the name ‘Hitler’. Soon afterwards, the young Edgar noticed his famous neighbour staring at him behind his window. This was in 1933, just after Hitler became chancellor. Feuchtwanger recollects many encounters with his Austrian neighbour, who arose to the most powerful man in Europe. In the meantime, Feuchtwangers family felt victim to the repressive purges of the nazi-regime. Edgar’s father, a respected publisher, was taken prisoner and then deported to the Dachau concentration camp and the library of the family was robbed.

Escape from the neigbour from hell

The family Feuchtwanger was privileged, as Edgar himself acknowledges. With help of relatives they were able to put up the 1000 Reichmarks needed for approval of the departure from Germany. They fled to England and survived the war. Feuchtwanger now dictated his memoirs to French journalist Bertil Scali. His story is told from a child’s perspective, and shows the rise of Hitler from the perspective of an upper-class Jewish family – a culture that soon was irretrievably lost to Germany.