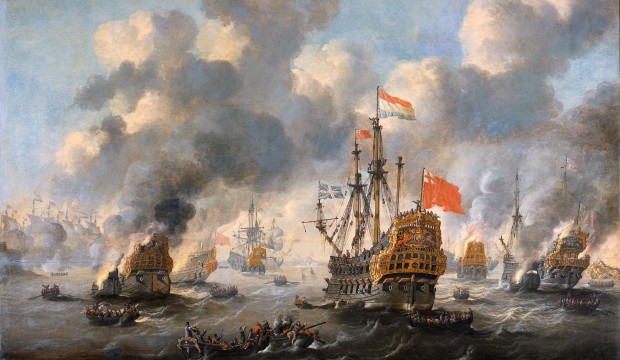 March 3, 1677: The Dutch ship Huis de Kreuningen sunk in the southern Caribbean,during the Battle of Scarborough Harbour. The Dutch, who controlled the island of Tobago at the time, were attacked by the French. The battle was  significant, both in terms of the number of lives lost and the damage done to both fleets. About 2,000 people, including 250 Dutch women and children and 300 African slaves, were killed. The Dutch lost the Huis de Kreuningen, which was the largest ship in the Dutch fleet with almost 40 meters in length and 56 guns. According to historical records, she was directly attacked by the biggest ship the French could muster, the Glorieux, with 120 meters in length and 72 guns clearly the superior ship. In the end, both parties had grave losses: The flagship of French Vice Admiral Comte D’Estrée – the Glorieux – sunk, with only 80 survivors of the 450 crew. The French attack was repelled and the Dutch retained possession of the island.

The ship itself is a unique finding in maritime history. No detailed plans of warships from the age survived  “so our only sources of information about the ships of the day are the wrecks themselves. It isn’t overstatement to say that what has been discovered is a treasure trove for archaeological researchers”, says leading archaeologist Kroum Batchvarov. He says his team  found seven or eight canons, Delft and Bellarmine pottery jars, lead shot that was never fired, dozens of Dutch smoking pipes and bricks that perfectly match the standard dimensions for  bricks made in the Dutch city of Leiden in 1647, strong indications that this ship is indeed the Huis de Kreuningen.