25 February 2014 by Jan Huisman in Archaeology News - No Comments 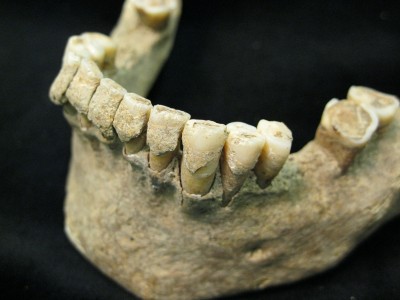 An international team of researchers discovered how they can use ancient plaque for modern research. With new techniques, they were able to preserve bacteria and microscopic particles of food from 1,000-year old plaque, taken from the teeth of skeletons. This discovery opens up a whole new range of research, and is already called ‘a microbial Pompeii’, referring to volcanic-ash-covered Roman city. Just like the unfortunate Pompeii, plaque offers us a unique insight to a lost world. Since its decay is rather slow, we will be able to recover data from plaque even when it is thousand of years old. The researchers state that calculus (plaque) will be more interesting to archaeologists than the teeth themselves.

The first discovery is that dental disease haven’t changed in the last 1,000 years from a bacterial point of view, despite major changes in human diet and hygiene. Furthermore, the ancient bacteria already contained the basic genetic machinery for antibiotic resistance – more than eight centuries before antibiotics were invented (1940s). Besides health information, the scientists recovered food-particles and identified them as different types of vegetables. Before, archaeologists would not be able to derive such information from teeth alone. Since the plaque acts as ‘a trap for dietary and environmental debris’, this new technique could prove to be a major methodological  breakthrough for archaeologists.

More information on: Website of the University of York