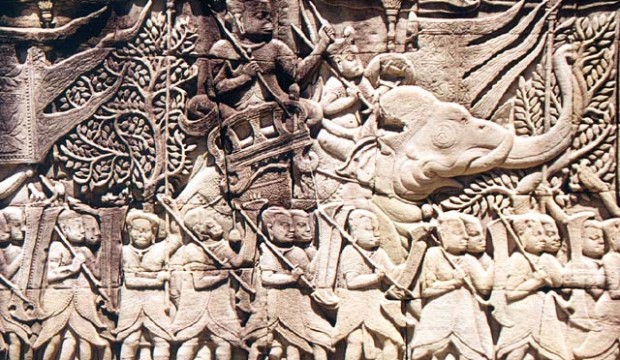 At a certain point, anybody who studies the Antiquities will encounter them: war-elephants. They played a major role in ancient warfare, most notably in Hannibals’ crossing of the Alps (218 BC) as he attacked Rome (how many elephants actually survived this remarkable feat seems questionable). One documented ancient battle featured a match-up between the big African elephant and its smaller cousin, the Asian elephant. This remarkable event took place on June 22, 217 BC., at the Battle of Raphia near Gaza, as the pharaoh of Egypt, Ptolemy IV fought the Greek king Antiochus III.

Battle between the Asian and African elephant?

Ptolemy won the battle, but his elephants, according to contemporary historian Polybius were afraid of their Asian adversaries – because they were larger. This seems contradictory to our biological knowledge, because the Asian elephant we know, are smaller than African elephants. So whats up with there fighting ancestors? New research has the answer: Ptolemy wasn’t using African elephants at all. He actually used Eritrean elephant, since this was the only pool he had access to. Eritrean elephants are smaller, more fragile, and today nearly extinct.

Polybius’ depiction of the bloody battle between the elephants

Polybius graphically describes this battle between the beasts in his Histories:

A few only of Ptolemy’s elephants ventured to close with those of the enemy, and now the men in the towers on the back of these beasts made a gallant fight of it, striking with their pikes at close quarters and wounding each other, while the elephants themselves fought still better, putting forth their whole strength and meeting forehead to forehead. The way in which these animals fight is as follows. With their tusks firmly interlocked they shove with all their might, each trying to force the other to give ground, until the one who proves strongest pushes aside the other’s trunk, and then, when he has once made him turn and has him in the flank, he gores him with his tusks as a bull does with his horns. Most of Ptolemy’s elephants, however, declined the combat, as is the habit of African elephants; for unable to stand the smell and the trumpeting of the Indian elephants, and terrified, I suppose, also by their great size and strength, they at once turn tail and take to flight before they get near them.