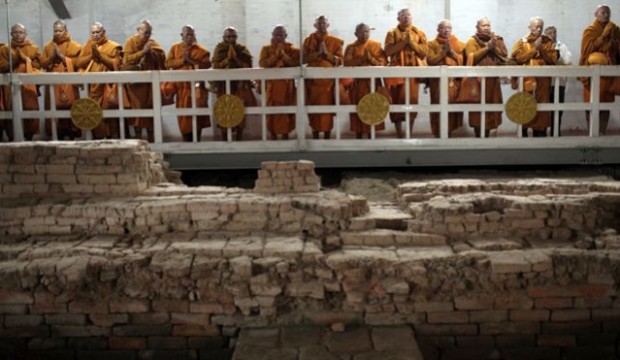 Untill recently, no archaeological proof of the early life of the Gautauma Buddha was found. Al that we knew of him was through textual sources and oral tradition. It was even uncertain when he lived – some scholars thought he lived in the third century B.C., others estimate he lived hundreds of years earlier. Now, at the birthplace of the Buddha near the sacred Maya Devi Temple at Lumbini, Nepal, the remains of a sixth-century B.C. Buddhist temple have been identified, and the life of the Buddha can be dated.

The timber structure is laid out beneath several stone temples and contains an open space in the center. This space may link to the nativity story of the Buddha himself. Buddhist tradition records that the Buddha was born in the Lumbini garden, as his mother was holding on to a tree. The researchers state that this open space likely was a garden with a tree in the middle – opening up the possibility that the actual birthplace of the Buddha is located.

More information on: The Science Daily