‘Besatzungskinder’ are still searching their fathers 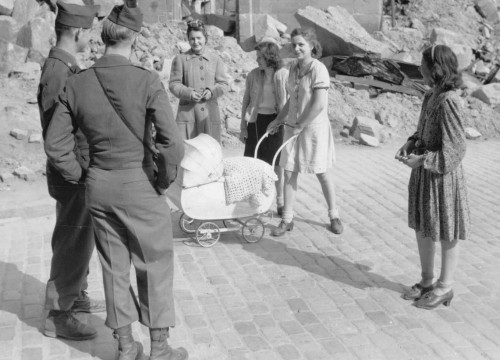 ‘Besatzungskinder‘ where children in post-war Germany born from Allied soldiers who disappeared before their birth. An estimated 200.000 of these children were left behind. Many of them never stopped looking for their father. Last Saturday, dozens of them gathered in Berlin. With help of GI Trace they still want to find their fathers. Only children of Americans stand a chance, because military personnel records of the UK, France and Russia are closed for public research.

Born with a German mother and an absent Allied father – it was a common sight in the defeated Germany of the late 1940’s and early 1950’s. As the Allied forces left Germany, their children stayed behind. The children are now in their 60’s and they still hope to gain some information of their lineage. “I have always had a feeling of incompleteness”, Ramona Lehmann says. She only knows her fathers face from a photo, taken before her birth. “I did nothing for years,” said the Austrian Helmut Bauer Stanley (64), the son of a U.S. soldier. Now he hopes to find the truth about his father. It is even possible he is still alive.

Only America has opened up their personnel files, over 55 million soldiers are archived. Even soldiers stationed in Germany after 1945 are included. Ute Baur, of GI-trace states that everyone gets all possible help. And with success: Baur himself recently found his father. The search is the more complicated while the mothers were embarrassed to talk about their relationship with an Allied soldier, as they were blamed for ‘sleeping with enemy’. Many mothers lied for many years about their relationships and concealed the name of the father. The ‘Besatzungskinder’ had a tough youth as they were rejected by the community. Life was even tougher when your were dark-skinned, as was the case with Ramona Lehmann. Her father was from Puerto Rico, as she learned later – he wanted to mary her mother, but got re-stationed and she married a German man. He is still alive, but Ramona hasn’t met him yet.

Even when the father is found, many former US-soldiers don’t want contact with their long-forgotten child. Daily requests are being made at the U.S. consulate to contact former soldiers, but often they decline the offer to make contact.

America's universities were built on slave-trade