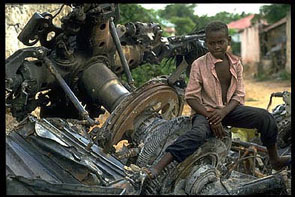 On the 6th of October 1993 two American Black Hawk helicopters were shot down in Mogadishu, Somalia. They were on a mission to capture or kill a band of local warlords as they were shot by militia fighters using rocket-propelled grenades. The pilots were lynched by mobs. What followed was a savage rescue operation by American forces, killing many Somalians in the city streets.  The Black Hawk Down-incident was immortalized by Mark Bowden’s book and the film adaptation by Ridley Scott.

As it the twentieth anniversary of the incident, 60 Minutes aired a 15 minute item on the issue. Interviews with special forces and army commanders help to retell the story. Previously unseen video footage is shown as well as a reconstruction of the flight and crash of the Black Hawks. The site where the helicopters crashed is investigated, and one thing becomes clear: not much has changed in Mogadishu, as the demolished building on the scene suggest. It still is one of the poorest regions in the world and religious tensions are omnipresent.

The way the incident was depicted in the movie and the book, was generally accepted as a true view on the account. The targeted warlords had ties with Al Qaida, so this battle is labeled as the first open clash between the terrorist-organization and American forces. The Somalians are regarded as brutal warriors, as sharks scenting the blood of the cornered pilots of the crashed helicopters. Above all, the mission itself is regarded as a purely humane operation, since its final target was to help the local population by opening up their food supply. Recently, this view is nuanced, mostly by Jeremy Kuzmarov on the History News Network.

Kuzmarov states that while the death of the Americans is tragic, the fact that many of the Somalian warriors had lost family members to U.S. attacks before is unreported. Also, during this and other rescue missions, American helicopter gunmen fired into crowds killing and wounding hundreds. As Bill Clinton commented: “When people kill us, they should be killed in greater numbers.” Kuzmarov explains how the situation in Somalia was partly caused by American foreign policy. Americans flooded the region with weapons during the Cold War. Warring factions were helped to battle each other even when this lead to mass murder. Like in 1988, when the city of Hargeisa was levelled by a warlord. He was backed up by the U.S., who had supplied him with weapons and intelligence. More than 60.000 were killed. This was not a standalone incident. Kuzmarov states that the Black Hawk Down incident shows that military intervention often has destructive and unexpected consequences. Unfortunately, as long as the general public remains misinformed the U.S. foreign policy likely isn’t to change that much.