Does ‘Black Pete’ have racist roots?

25 October 2013 by Jan Huisman in News Scrutinized - No Comments 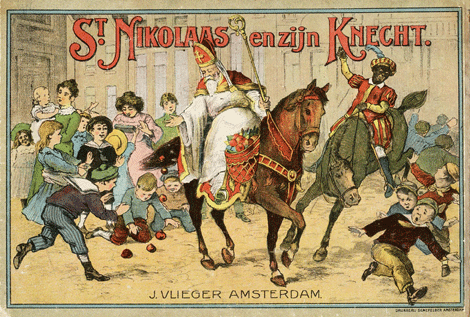 The recurring discussion about the Dutch Sinterklaas-celebration has culminated this year, as even the United Nations investigates this age-old tradition. The main issue is the possible racist background of the celebration, where a white-bearded bishop gives presents to children, as he is assisted by his black-skinned helper called Zwarte Piet, or Black Pete. The UN had a look at the matter for a couple of days and came to verdict: the figure of Black Pete could be traced back to the time of slavery. A large part of the Dutch population thinks otherwise – millions petitioned in support of Black Pete in a matter of days. But where lie the roots of this dark figure?

In general, a blackened figure to scare kids is nearly as old as human history. Herodotus (484 bC-425bC), the first historian, mentions that people were painted black when they tried to connect to their forefathers, or prepared for battle. The painting of men was connected to a spiritual experience, states Arnold-Jan Scheer, who researched the origins of Black Pete. He underlines the existence of a Black Pete-figure all over Europe. They have different names, like Julbocken (Scandinavia), Schmutzli (Switzerland) or Krampus (Austria) and different appearances. Although the Dutch Zwarte Piet clearly is a human figure, the other presences are often ghoulish creatures, as can be seen in the movie below. Why are they so different?

The origins of the Dutch Black Pete

Having Black Pete as the helper of the bishop Sinterklaas, is a relative new tradition. Although the figure ‘Sinterklaas’ is based on the historical bishop of Myra, a Byzantine clerk who died on the 6th of December, 342. His helper was added to the folklore at a later date. Other countries already had their version of a black helper when Dutch teacher Jan Schenkman published a children’s book called ‘Sint Nicolaas en zijn Knecht’. The bishop was now accompanied by a black helper, not a terrifying creature, but a black man. At first, Black Pete played the role of a not-too-smart helper. He scared the children, just like his counterparts in other countries. But as time passed, in the 20th century, Black Pete became a more friendly figure.

This looks like a good explanation, but there are many more theories on the roots of Black Pete. To name a few, he could be an Ethiopian slave, set free by Sinterklaas. As a gesture, Black Pete vowed to serve his liberator. Another story is that Pete was a chimney cleaner and thus became black ‘by profession’.  Some even say Pete can be traced back to the two black ravens that accompanied the Scandinavian God Odin. Different aspects of the Sinterklaas’ celebration can be explained by all these theories. But the introduction of Black Pete almost certainly derive from the book Schenkman wrote in 1850 – the other theories are based on folktales afterwards.

The age-old tradition of a black figure scaring children certainly isn’t historically connected to racism. However, the Dutch figure of Black Pete can be connected to the stereotype image of a black man in the 19th century – an image that was shaped by racism. Today, Black Pete is a hotchpotch of many historical images, a product of human history. Regrettably, slavery and racism are therein abundant. Hence, it is probable that these elements have influenced the figure of Black Pete. But are these elements reason enough to discard the Sinterklaas-celebration entirely, as Verena Sheppard of the UN suggested? I dont think that is a sollution, since worldwide, many traditions have dubious roots.  The real question that has to be answered is: Does the modern figure of Black Pete promote or propagate racism today? This question is to be debated for the years to come. Racist or not: Black Pete is here to stay; not because his color of skin nor his origin, but due to the fact that he is an essential part of a very much beloved tradition – as the millions petitioners for the continuation of his existence have shown.