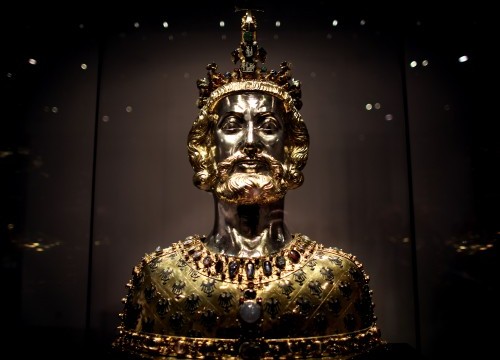 The bones of the former emperor of the Franks and the Holy Roman Empire, Charlemagne or Charles the Great, proof that the ‘founder of Europe’ was a large man. Contemporary sources already mentioned that Charles the Great, who died 1200 years ago on the 28th of january 814 was extraordanary large for his day. His biographer, Einhard says:

“Charles was large and strong, and of lofty stature, though not disproportionately tall (his height is well known to have been seven times the length of his foot); the upper part of his head was round, his eyes very large and animated, nose a little long, hair fair, and face laughing and merry. Thus his appearance was always stately and dignified, whether he was standing or sitting; although his neck was thick and somewhat short, and his belly rather prominent; but the symmetry of the rest of his body concealed these defects. His gait was firm, his whole carriage manly, and his voice clear, but not so strong as his size led one to expect. His health was excellent, except during the four years preceding his death, when he was subject to frequent fevers; at the last he even limped a little with one foot.”

According to Swiss researchers, who investigated the bones in his sarcophage that is kept in Zürich, Charles was 1.84 meters. Compared to the average height of people today, he would have been 2 meters if he had lived in our time.

More information on: The local

Why 'War Generation' is strongly criticized in America