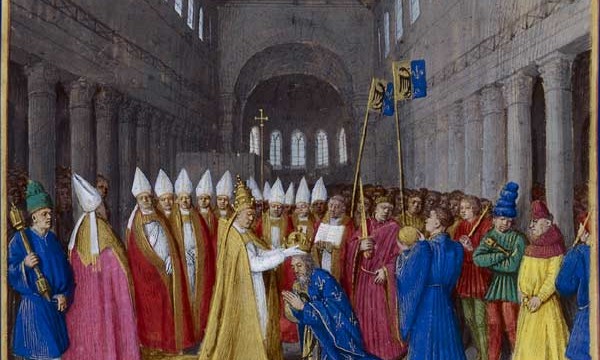 The historical image of Charlemagne, of Charles the Great (747-814) is as positive as it gets for a medieval king. Charlemagne was one of the most striking personalities throughout the Middle Ages. He was a tough warrior, but especially a man of the church, a state-builder and cultural reformer. He won most battles he fought, so he had a good press – the more while the clergy was on his side, and they wrote the histories that in their turn shaped our historical image. Charlemagne was long to be thought of as the creator of the new Europe, a European union avant la lettre. That image has changed, as a group of historians today announced at a conference in Aachen. Although Charlemagne still is to been as a towering medieval figure, he is not anymore ‘the builder of Europe’.

Charles the Great, a pious warrior

Already by the end of the 8th century Charlemagne was a legendary figure. He wrought an empire on the foundations of the Gallo-Roman domains and  subjected a wide range of tribes and ethnic groups. He violently crushed all opposition to him or his religious and cultural reforms – ravaging the land of the Saxons in a war that lasted for decades. Brutal and violent as his rule may have been, Charlemagne stimulated and regulated cultural and intellectual life as well. He forced unity in language and writing and connected the empire by building roads. He unified the countries he had conquered and by that account his image as the first European emperor was born.

How Charlemage became founder of Europe

This image of Charlemagne as the first European ruler was cultivated by a score of Early modern historians.In 1566 Jean Bodin described Charlemange as the first civilized European monarch who defended the country (to his account, France) against barbarian hordes. Leopold von Ranke in his Weltgeschichte (1881-1888) said Charlemange ‘was not only the predecessor of all European kings. He is the patriarch of the Continent, that only can exist because he has created it’s foundations’. Though these views were strongly disputed along the ages, the reputation of Charles the Great remains undiminished. This is underlined by the yearly awarded Charlemagne prize, given to the one who has contributed the most at the ideas and values of a unified Europe.

Next year, the great Conqueror will be dead for 1200 years and all over Europe Charlemagne will be remembered with exhibitions, congresses and probably lots of documentaries and books. It is time to refresh our image of a medieval king who accomplished a lot but also was a relentless and oppressive warlord. The statement given by prominent Charlemagne-researchers in Aachen today was a nice start.

Does 'Black Pete' have racist roots?