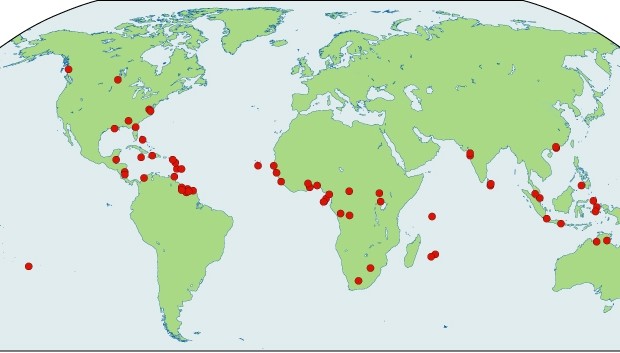 Modern historical research isn’t just focussed on written sources anymore. An interdisciplinary approach is the standard, while this generates a multi-facetted perception on the historical topic.  A good example is the recently published “Atlas of Pidgin and Creole Language Structure“. This study surveys the geographical development of the mixed languages ​​of North and South America , Africa and the Asia- Pacific region provides detailed comparative data on the syntactic and phonological structures of 76 Contact languages. Conclusion: the Pidgin– and Creole-languages are resulted of contacts between European traders and colonists on the one hand and African slaves on the other.

For several years an international team headed by the Max Planck Institute surveyed 25 languages ​​in the Western Hemisphere, 25 African languages ​​and 26 Asia-Pacific languages. An international team collected the data and represented in on an atlas with 130 maps, to show the distribution of grammatical and sociolinguistic information. Many of the maps show striking similarities between grammar used in languages ​​like Caribbean Jamaican Creole or Haitian Creole and African’ languages. The latter were slaves, who were shipped to America in the 17th century. Since the vast majority of slaves were transported to the Caribbean colonies and the southern United States, the grammar of Caribbean languages ​​resemble the West African languages ​​in many ways.

The aforementioned languages borrowed their vocabulary from the languages ​​of European and Arab colonizers. Many Spanish, French, English and Portuguese words can be recognized in Creole and Pidgen. This seems to contradict the grammatical resemblance mentioned above. But grammatical structures preserve older historical connections and serve as a window to the past, says Martin Haspelmath from the Max Planck Institute. For example, in Jamaican no past tense is used for the verb e.g.: “Di di huol dig the man”, in English: “The men dug the hole”. This is typical for many West African languages. Never was so much systematic date used to show the true roots of these languages, according to the publisher. This study shed lights on the social history of language – but gives an insight into the development of the historical profession as well.