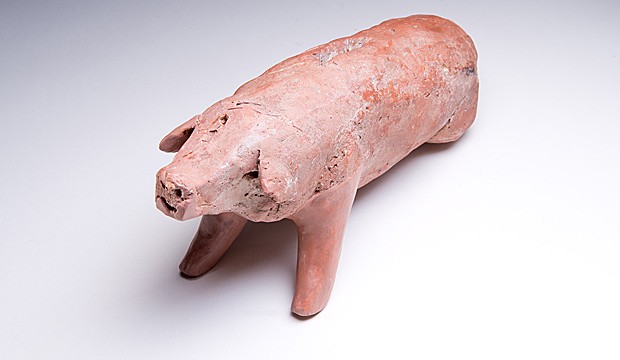 Imagine you have a piggy bank that’s more than 700 years old. It must be so inviting to take a hammer, break it and marvel at the exposed riches. Luckily, that’s not the course of action taken by the Weimar Museum of History. They have Germany’s oldest piggy bank in their collection: the Tonschwein, created in the 13 century. Of course, experts from the Weimar museum shook the piggy bank so they could hear if something was inside – a technique also used by your little brother. Although they couldn’t hear anything, the researchers still hoped some coins were baked into the clay. So they used X-ray to check inside Germany’s oldest piggy bank. Disappointment followed: nothing was inside.

A short history of the word ‘piggy bank’

I did a quick research on the origins of piggy banks. It’s interesting that most websites derive the existence of the piggy bank from the english language. About 600 years ago, ‘pygg’ was the Old English name for pink clay. Money-boxes were apparently made from this clay, hence the word ‘piggy’. The ‘bank’ goes back to the origins of modern banking, a medieval Italian invention. ‘Banca’ relates to the benches where the first Venetian money-traders where seated (‘banca rotta’ means broken bench, what probably meant the trader went out of business). This explanation focusses on the English language, but as it turns out, the piggy bank is a world-wide phenomena with deep roots in human history.

Pigs were used as a storage-container for thousands of years

Pigs have been domesticated as soon as people started to live in agrarian societies, about 5000 B.C. Because most humans until recently mainly lived an agricultural way of live, many families had at least one pig. All the leftovers were given to the pigs, so that they gained weight. When they were large enough they were ‘broken’ and eaten. Thus, the connotation of pigs as storage containers is world-wide phenomenon. Examples of medieval piggy banks are found in Europe, China and Indonesia.

It’s a rarity that piggy banks from the middle ages survive up this day – they only serve a temporary purpose. The fact that the piggy bank from Weimar wasn’t broken in the last 700 years, should be an indication: if there was some money inside, it probably would have been broken a long time ago.