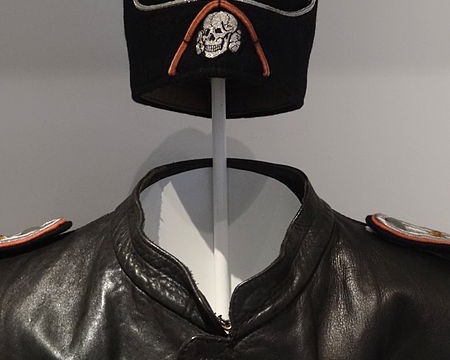 It is a well-known fact that Hugo Boss designed the SS-uniform, but how people dressed in Third Reich is not a much debated topic. What did clothing of the 1930s and 40s look like? What was worn in everyday life, at home , at work or on travel? Did the nazis influence fashion? With the exhibition ‘Glanz und Grauen – Mode im Dritten Reich‘ the LVR Industrial Museum in Euskirchen answers these questions.

To what extent were the people allowed to wear what they wanted? Although the nazis created a totalitarian state, this exhibition shows that nazi-clothes were influenced by the glamour of foreign movies and their stars. The nazi-fashion competed with the international chic – much to the dismay of Goebbels, who wanted to create a ‘German fashion office’ with more traditional dresses. In the early 1930’s, this initiative didn’t stand a chance.

At the outbreak of the war, glamour was exchanged for patriotism. Raw materials and textiles were short in supply and women did the best they could, creating practical clothes, often sewn together from remnants. They tried to give a ‘chic’ touch to their creations, as contemporary nazi-journals stated. The nazis tightened their grip on public life in the last years of their regime, and Goebbels finally had his fashion-control. Clothes were rationed and distributed on clothing coupons.

The exhibition covers 600 square meters with over 100 original costumes and photos, fashion illustrations, magazines, children’s books and toys on the topic. On display are clothing in daily life, the uniforms of the League of German Girls and Hitler Youth, but also clothes of unruly youngsters, silk evening dresses and uniforms. The exhibition starts on the 11th of November. Follow the link for pictures of the exhibited clothes.