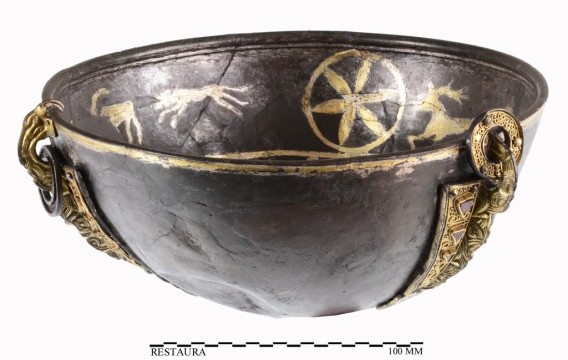 The discovery of a rich decorated silver bowl at an excavation in the Dutch town of Oegstgeest (near Leiden) gives us an insight into the widespread international network of its early medieval owners. The bowl was created in the sixth century, probably in the Mediterranean or Near East. Further decorations,  added in the early seventh century, show typical English, German and Scandinavian influences. The origin and later additions of the bowl suggest that its owners were part of a far-reaching trading network.

Animals and plant figures of gold decorate the bowl, that is inlaid with precious stones as well. Since most similar artefacts from this era are made of bronze, this particular find is very rare and valuable. It is unclear why it was put in the ground. Researchers suggest it could be part of a sacrificial burial, though there is no proof of a local early medieval élite.

At the time, the region was dominated by the Frisians, an early medieval tribe that controlled most of the continental North sea coastal area (excluding the peninsula of Scandinavia). They were known for their widespread trading networks.