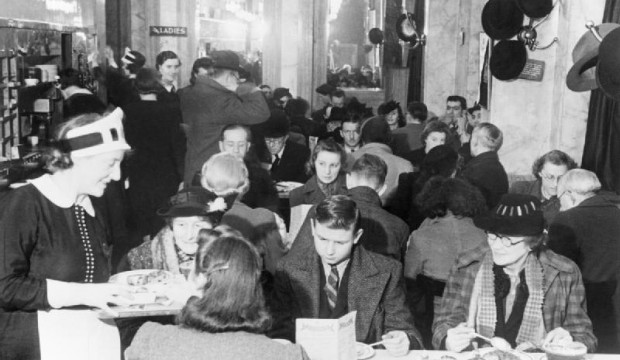 Thousands of American fast-food and retail-workers striked last week, in protest of their extremely low wages.  These strikes have a historical precedent. In modern history, Americans thought that waiters and waitresses just couldn’t be organized in a worker-union. These unskilled workers weren’t allowed to join larger labor movements, in spite of their poor working conditions. Waiters and waitresses were mainly drawn from African-Americans, immigrants and women. Hardly the empowered part of 19th century American society.

Waiters were African-Americans, immigrants or women

At the start of the 19th century, most waiters were African-Americans. In the late 19th century, the waves of European immigrants increased the amount of German and Irish waiters. Only as the First and Second World War called most men to arms, did women started serving. Despite their large numbers, they were never allowed to unify in a worker-union, but as early as 1853, waiters found out that striking was an effective means to get higher wages.

In April 1853, African-Americans working in New York-hotels struck briefly and won higher wages. This victory inspired other waiters, and soon strikes took place all over east-coast America, although not all strikes were succesful. Sometimes the strikers were blacklisted and replaced by female waiters. Overall, waiters were better off. Higher wages were earned and it was clear that strikes were effective. The second nationwide strike in 1893, was better organized and even more succesful.

It is remarkable that both strikes occurred in a time of economical crises, much like the strikes today. A major difference is that strikers today have way more rights and that the demand for waiters is growing fast in America. From a historical point of view, things are looking bright for the fast-food-workers.