09 November 2014 by Jan Huisman in Antiquity News - No Comments 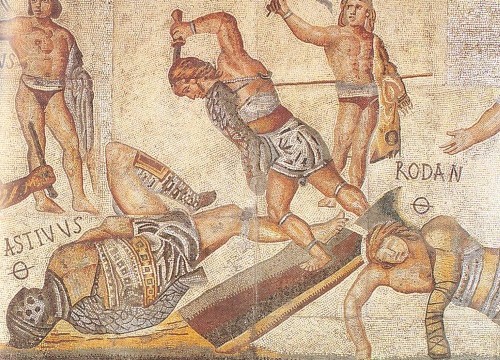 According to popular belief, meat eaters are more aggressive and energetic than vegetarians . How is it then that some of the most brutal and aggressive warriors from history, Roman gladiators, ate mostly plants and grains?

New research of the medical university of Vienna suggests just that. The researchers analyzed by spectroscopy the 1,800 year old bones of 22 gladiators buried at Ephesus. As it turned out, the diet of Roman gladiators consisted largely of grain barley, wheat and beans. They refrained from consuming dairy products as well. Instead, the gladiators drank a power beverage, made from the ashes of plants that supposedly helped them recover after doing battle. The ‘magic potion’ contained strontium and magnesium, ingredients that would have helped them strengthen their body.

More information on this historical subject: University of Vienna