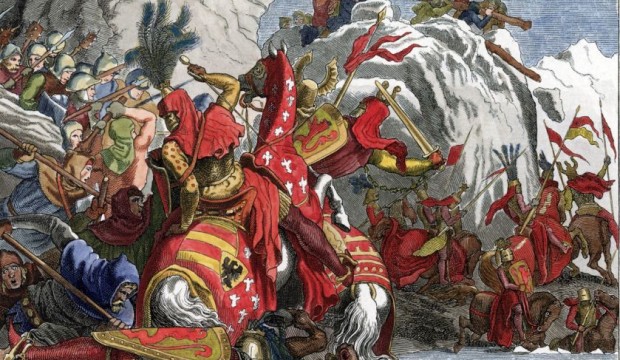 Ask an arbitrary Swiss man or woman what the most important event in Swiss history was, and the battle of Morgarten is likely to be named. In 1315, the Swiss confederation beat the Habsburgers at Morgarten and gained independence from the Holy Roman Empire. Every history museum in Switzerland sports this legendary event, as it is regarded as a watershed in the history of Swiss independence. Recently, historians put doubts on the historical accuracy of this battle in a nation-wide shown documentary. Some even argue there may have been no battle at all.

The battle of Morgarten is surrounded with tales of legend. Proud stories of how the tiny states of Uri, Schwyz and Unterwalden combined their forces overnight. How their commanders fired the troops with vivid speeches and lead them to victory. But the fact is, the battle is only recorded in much newer chronicles. No contemporary eyewitness account mentions the battle. And to make matters worse, no archaeological evidence provides a definitive proof of the battle. Of coarse, it was common in the Middle Ages to loot the dead. But doubt has arisen, and the Swiss media are all over the matter.

Although the allegations are right, it is highly probable that some sort of clash did occur in 1315. In the following year, the Holy Roman Emperor Louis IV, confirmed the rights and privileges of the Swiss confederates. This has been recorded, and it seems highly unlikely that the Emperor gave away this rights ‘for free’. Maybe the battle wasn’t as illustrious as it has been depicted in most Swiss history books, the fact remains that the confederacy somehow gained their independence in 1315. Since Switzerland has a relatively peaceful history, this rare battle is likely to be praised for the years to come.

A grim message on Armistice Day