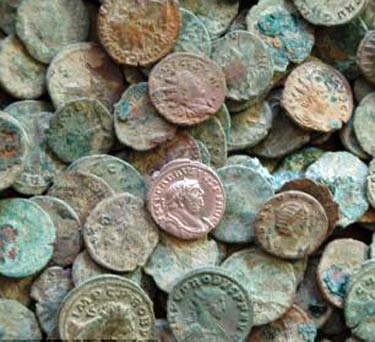 A Roman treasure dating from the early 5th century was dug up last week near Germersheim in the Rhineland-Palatinate, Germany. Not by official archaeologists, but by an amateur who conducted an illegal attempt to recover the treasure after he found it with his metal detector. He dug up the metal objects and destroyed the historical context along the way. For archaeologists, the exact location of the findings is often as important as the objects themselves.

At the site of today’s Germersheim there existed a fortified military camp in the late 3rd century AD, called Vicus Julius. It was part of the limes and thus meant to secure the Rhine frontier. After its abandonment of the Roman legions around 406, Roman culture continued to be the dominant civilization.

Based on initial expert estimates, the findings date from the 5th century AD. During this tumultuous era period Germanic tribes, barbarians according to the Romans, crossed the imperial borders everywhere in Western- and Central Europe in search for better living opportunities. Many were also on the hunt for precious goods, with a special interest for metal objects. Sometimes they took these back to their homeland. It is likely that this treasure was buried near Germersheim by a group of marauding Germands, after looting the Romans.