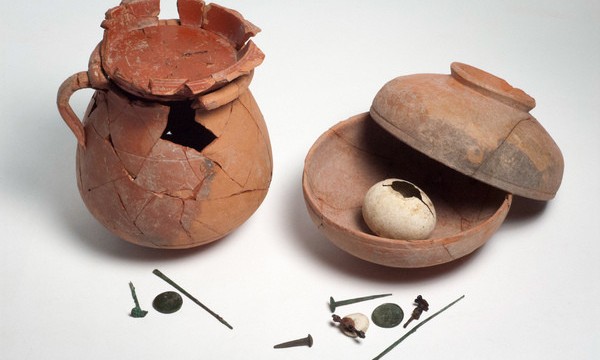 The legendary rich king Croesus made Sardis, the capital of Lydia (modern Turkey), famous. Even after more than 2500 years, his fabled wealth gives the ancient city a golden aura. After all, Sardis was the city where coinage was invented. After Croesus’ age, in the early 6th century BC, Sardis was occupied by the Persians, Greek and Romans. Many archaeological finds have been made in Sardis, but its latest revelation is out of the ordinary.

Two ritual deposits are found, each consisting of a small pot with a lid. Inside, both have a coin, an egg and a group of sharp metal implements. The objects date from 60 – 70 AD, since the coins have the imprint of the Roman emperor Nero (54-68) on them. The archaeologists state that the offerings were dug into a pit in the floor.

Nero and Cybele: two sides of the same coin

The exact meaning of these deposits is open to debate. But the coin combined with the eggs seems special. The coin in particular rouses the archaeologists’ interests. The front of the coin has the image of Nero on it, but the backside has the image of a lion engraved on it – the emblem of the Lydian kings and the mother goddess Cybele. Whatever its implications, finds like these are very rare while ritualistic objects often aren’t intact.