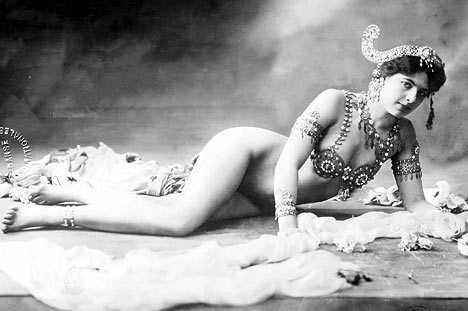 The birthplace of the legendary Frisian secret agent, dancer and courtesan Mata Hari (1867-1917) was destroyed Saturday as a huge fire destroyed many building in the historical center of Leeuwarden.

Mata Hari – a renowned dancer for the rich

Mata Hari was born in Leeuwarden under the name Margaret Gertrude Zelle on the 7th of August 1876. She grew up in a wealthy family and married at the age of nineteen with Rudolph MacLeod, who was an officer in the Dutch East Indies Army. Both left for the  Dutch East Indies but in 1902 Mata Hari left MacLeod and she returned to the Netherlands. She left for Paris to work as a nude dancer, and took the name Mata Hari, meaning ‘Eye of the day’ in Malaen. Not before long, she became a well-known dancer and courtesan.

The Friesian became entangled in a  espionage web during the First World War (1914-1918). She came into contact with German intelligence service, who paid her 20.000 francs for her services. But Mata Hari fell in love with a Russian officer and was subsequently asked to work for the allies. This role as double agent would prove to be fatal, as both the Germans and the French were suspicious of her. On 13 February 1917, Mata Hari was arrested in Paris and after a short trial, sentenced to death, although there wasn’t any clear evidence. The execution was carried out on the 15 of October 1917. 30 years later, the main prosecutor would admit that ‘there wasn’t enough evidence to flog a cat‘.