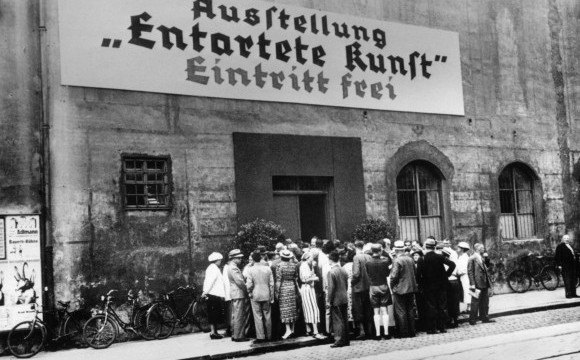 The Munich art-treasure keeps raising questions. Journalists have now researched the background Cornelius Gurlitt’s father, Hildebrand Gurlitt ( 1895-1956 ). Hildebrand Gurlitt was a respected art dealer in the Third Reich and was connected to Hitler. Nonetheless, Gurlitt’s role in the nazi-era remained ambiguous. Right after the war he was suspected of cooperation with the nazi’s, but he was soon released from American custody. Gurlitt himself stated that he actually opposed the nazi’s during the nazi-era as he tried to preserve the ‘subversive’ art. Gurlitt claimed the works had come “from the painters of emigrating clients and friends”, but also from a depot in Berlin, where the Nazis stored unwanted art that was removed from museums in 1937 from the museums. Whether the “emigrating customers and friends” had to sell their art under compulsion remains unclear.

After the war Gurlitt continued his career as a museum director. In 1948 he became head of the prestigious Art Association of the Rhineland and Westphalia in Düsseldorf. This shows that Gurlitt was well-connected after the war. He had international contacts with artists such as Marc Chagall as well as to embassies and governments. Gurlitt had an excellent reputation as an art expert and clearly his background as a nazi-art dealer was no obstacle to his ascent. Gurlitt probably had no doubt that he was the rightful owner of the art, as he even wanted to organize an exhibition with 30 pieces of his collection. Gurlitt died on 9 November 1956 in a car accident on the way to Berlin, before this exhibition was initiated, and he was hailed as a champion of avant-garde art.