The Nazi-past of Dr. Oetker 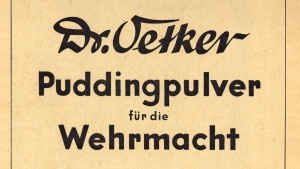 The former chief of Dr. Oetker, the food company famous for its pizza’s, was a nazi. No news here, most historians are aware of the fact that all major company’s in Germany’s Third Reich collaborated with the nazi -regime. But to what Rudolf August Oetker (1916-2007) supported the nazi’s was never clear. A historical investigation has been conducted on instigation of August Oetker (1944), Rudolf’s son.

The German news agency ‘Zeit’ interviewed August Oetker.  He states that his father was a true nazi. The fact that the nazi past of Dr. Oetker chief executive was concealed for so long, disturbed August Oetker. But he couldn’t stand up to his father, he openly admits:  “He did not want to talk about these times,” says August Oetker. “He said: children leave me be on this matter.” After 1945, his father had still been prone to right-wing ideas, August Oetker claims: “Some of these people have the same believes up to this day. And he was one of them’.

Rudolf Oetker never admitted his nazi-past in public. Although it was clear his company supported the nazi’s, to what extent never was exactly researched.  “Maybe he did not want to have been what he was. Maybe he wanted to edit this part of his life. I can understand that. ” August Oetker says.

The political history of the cigarette