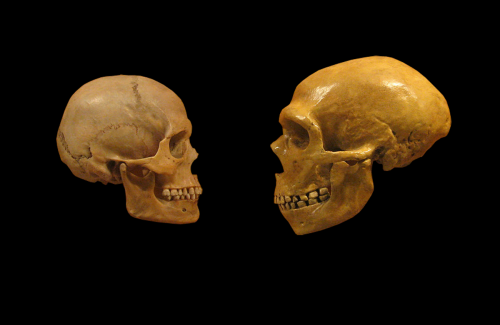 A new research project conducted by the University of New England shows that Neanderthals probably used the spoken word to communicate. This contradicts the view that modern humans are unique in this matter. It was long thought that the Neanderthals simply lacked the necessary cognitive capacity and physical ability for speech. Their extinction, some 30.000 years ago, underlined their overall evolutionary inferiority to modern humans. But it seems they had more with us in common than we thought.

An international team of scientists used the latest 3D X-ray imaging technology on a 60,000 year-old Neanderthal’s Hyoid-bone. This bone is used for speech by modern humans. As it turned out, our Hyoid-bone is almost indistinguishable from the Neanderthal’s (but it is very different compared to primates). Computer models proof that in terms of mechanical behaviour the Neanderthal Hyoid was basically the same as our own. This strongly suggests that this key part of the vocal system was used in the same way: to talk.