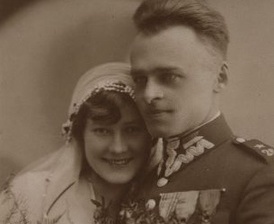 It is hard to imagine how a 39-year old father of two deliberately walked into a razzia of the SS on the 19th of September, 1940. As a Polish army officer he couldn’t expect a gentle treatment, but Witold Pilecki wanted personally to find out want happened to all the Jews who were captured and transported to concentration camps. Although Pilecki expected harsh treatments, the horrors he encountered as prisoner 4859 in Auschwitz went beyond all imagination. Pilecki survived the camps, with one goal in mind: tell the world what happened in nazi’ prison-camps. A recent publication, Freiwillig in Auschwitz, tells his story.

During his detention, Pilecki systematicly noted what went on in the camp. He also set up a resistance-group, which organized extra food rations and clothes for the needy. Pilecki pushed his resistance-group to take over the camp, with an open rebellion against the 1000-some SS-guards. Outside help was needed for such an endeavour, but the Polish resistance army hesitated and finally refused to attack and liberate the camp, in fear for nazi-reprisals against Polish civilians. Dissilusioned, Pilecki fled the camp, and ended up in the Polish resistance. He played a heroic role in the Warschau uprising in 1944, in which he defended a street against German panzers for 2 weeks.

After the Second World War, Pilecki continued to fight for a free Poland, never accepting the Soviet predominance of the country. As the Soviets ordered Pilecki to leave the country or face the consequences, he refused. Pilecki was subsequently captured by the communist secret service in 1948, tortured, and shot as a spy. In 1990, he was rehabilitated.

Edited version of Hitler's Mein Kampf is still to be published