The political history of the cigarette

19 October 2013 by Jan Huisman in News Society - No Comments 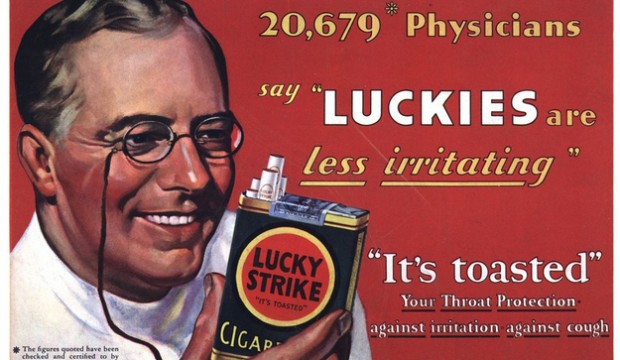 It’s hard to imagine cigarretes were once promoted by doctors (watch video below). We now know how unhealthy they are, and no political party would use tobacco smoking for propagand purposes. That wasnt the case in the 19th and early 20 century, in an age that cigarette smoking was a common and healthy habit. Researchers from the universities of Hamburg, Vienna and Jena are investigating the political significance of the cigarette.

Whether a Marlboro Man or a cigarette advertising from the Nazi period, cigarette advertising can convey a hidden political content says researcher Rainer Gries. More so, cigarettes itself can by its symbolism, their smell and their use have a message. Gries gives an example of cigarette ads in the turbulent 1930’s in Germany. The nazis had their ‘sturm’ cigarette. Their political opponents , the ” Iron Front ” of social democracy, instead propagated brands like ‘freedom’ and ‘discipline’. The researchers expect to get new insights in the political culture behind the cigarette.

The Nazi-past of Dr. Oetker

Priebke's body will be buried on a concealed location