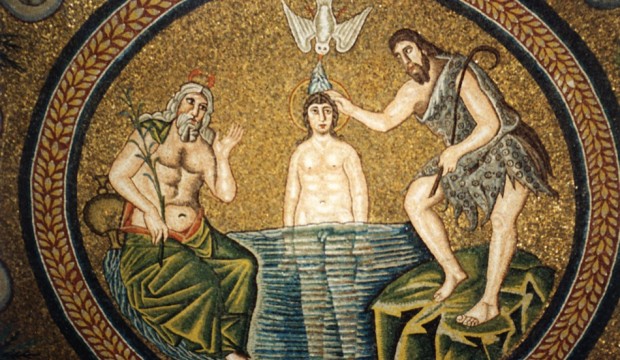 Our image of Jesus is that of a bearded, masculine figure. A man in agony, hanging on the cross, crucified for the sins of humanity. This rather gloomy presence is quite different in comparison to the Jesus from early Christianity. This original image of Christ is much debated lately, mainly by art historians. Recently, a German classical historian, Werner Dahlheim researched the era of Jesus’ life and the descriptions of his appearance: It’s clear that body of Christ changed a lot over the years.

The oldest descriptions of Jesus

Dalheim states that to his account it is indisputable that Jesus is a historical figure, given the brief descriptions listed in Suetonius, Tacitus and Pliny. However, the Gospels conseil the truth and they cannot be read as a biography of Jesus’ life. The only more or less trustworthy sources are Roman. Therein, Jesus is defined as a terrorist who justly has been crucified. His religious followers are described negative as well. That is no surprise, since Christians tended to retreat themselves from Roman society. They did not go to the public baths, nor did they attend games in the circus. To make matters worse, they only worshipped one God, and to them, the emperor was just another mortal. It’s easy to understand how the average Roman didn’t like Jesus or Christians.

Jesus was thought to be a cripple for centuries

No Roman source mentions the appearance of Jesus, and neither do early Christian sources describe their saviour. That is remarkable, since physical descriptions are common in these sources. Rumours about his appearance were abundant – it was long thought that Jesus was a cripple. This assumption derives from the fact that in early Christianity, most of the flock belonged to the social lower class. Only 400 years after Jesus’ death, these rumours disappeared.

The oldest known image of Jesus clearly shows how the Romans disliked him. On a painted wall in an upper-class house in Rome (170 AD) a crucified man with a donkey head is depicted – Jesus. A blasphemous offence to Christians, clearly made by the pagan Romans who mocked the executed rebel. Not much like the Christ we know today. But the first images of Jesus, made by Christians themselves, are quite different as well (picture above). Christ is depicted as an aristocrat, a Roman noble in a toga. No beard, no cross, no misery – these are all later additions. The beard and the cross were added around 450 AD. The severe agony of Jesus’ figure is a medieval additive.

Were did Jesus’ beard and long hair come from?

So why do we think Jesus had long hair and a beard? A compelling explanation is given by Waldemar Januszczakin in the documentary The Dark Ages: a clash of Gods. He suggests that during the first, wretched years of Christianity, the Christians had low social status. They wanted Jesus to be a nice noble Roman – a likeable figure, feminine, beardless, living the good life. During the 4th century, Christianity became the main religion and the chief Roman God, Jupiter, had to be replaced. Jupiter, bearded, long-haired shows remarkable similarities with his succesor.

It is funny to think that the imprint on the Turin shroud looks probably more like Jupiter than Jesus.

America's universities were built on slave-trade