25 November 2013 by Jan Huisman in Modern News - No Comments 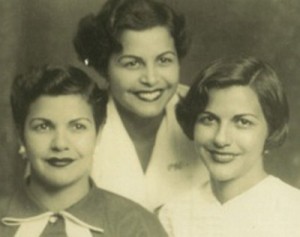 Today it is exactly 53 years ago that the three Mirabal sisters were killed. The women opposed the dictatorial regime of Rafael Trujillo in the Dominican Republic. The sisters openly opposed against the oppressive regime by distributing pamphlets. Rafael Trujillo staged a coup in the 1930’s in the Dominican Republic. This marked the beginning of a long period of oppression and dictatorship as Trujillo had absolute power and promoted a personality cult. During his reign, approximately 50.000 people died.

In the 1940’s, on of the Mirabel sisters, Minerva, studied Law and worked her way up to the main court of the Dominican Republic. As she became familiar with the true political situation in the country, she began to openly commit resistance to the regime by distributing pamphlets. Her sisters Patria and Maria Teresa soon joined her activities. The three founded an activist group named The Fourteenth of June-movement, named after a massacre by Trujillo ‘s forces, which had occurred on that date. In the 1950’s, the sisters performed a range of protest actions against the regime and they were imprisoned several times.

In February 1960 Maria Teresa and Minerva were arrested, imprisoned and tortured. International pressure on Trujillo mounted and he was forced to release them. Their husbands were still imprisoned. On November 25th, 1960, Maria Teresa , Minerva, Patria visited their spouses. On the way back they were stopped by Trujillo’s soldiers, dragged out of their car and clubbed them to death. The dictator Trujillo was killed the following year, but his supporters kept control over the country and even won the democratic elections in 1966.