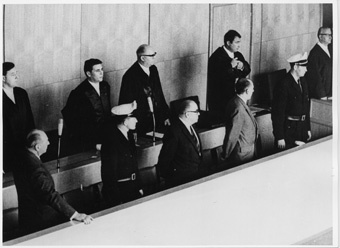 The tape recordings of the Frankfurter Auschwitz Trials can now be heard on the website of the Fritz Bauer institute. These audio  files contain the recordings of the trial, held on December 20th, 1963, against 22 former SS officers and employees of the infamous Auschwitz extermination camp. It was the second process against Nazis who worked in Auschwitz. The trial lasted for two years and was controversial because almost all accused were acquitted.

The most important Nazi leaders, like Goebbels, Himmler and Hitler, were dead after World War II. But they were a relatively small group. Although some lower echelon Nazi-criminals were punished directly after the war and were executed, the majority of the camp-workers escaped prosecution. In Auschwitz alone, around 7000 nazis worked there during World War II. Only 1000 of these were caught and prosecuted during the Frankfurter Auschwitz Trials.

The influence of Fritz Bauer on the Auschwitz Trial

A Jewish judge and prosecutor, Fritz Bauer, lead the Auschwitz Trial and had a major influence on the process. Bauer had to imply the law on his own initiative. As German law stated, defendants could only be tried for complicity if they had followed orders. Because this mostly was the case, defendants had much space to plead their cause.

At the Frankfurter Auschwitz trials the camp police (kapo’s) were persecuted for the first time. The camp police consisted of appointed prisoners who got better better treatment, like food and privileges, as payment. These prisoners were known for their violent behavior and subsequently hated by their fellow inmates. Although their role was somewhat ambivalent, being offenders and victim at the same time, they were tried nonetheless for their frequently brutal behavior.

Results of the Auschwitz Trial

As most of the defendants were acquitted on August 19, 1965 , the process was ‘a failure’ as Fritz Bauer stated. Although the process received much media attention, both nationally and internationally, only high nazis were accounted responsible for the horrors of the Holocaust. Bauer stated that low ranking officials were responsible for their deeds as well, but they could be prosecuted because of the legal system.

Video reel of the Auschwitz process:

More on the Auschwitz trials on:

Putin's letter may mark the end of American hegemony