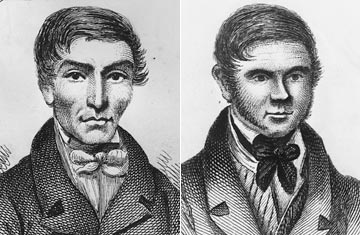 At Edinburgh’s university campus five human skeletons have been unearthed. Radiocarbon-dating suggests that the human remains date to the 18th / early 19th century. This was a glorious age for anatomical research. Since these bones were threaded with wires, it is likely that these remains served just that purpose.

The Scottish city of Edinburgh was a center for medical studies from 1780’s well into the 19th century, with over 200 new students attending the university each year. Many anatomical research institutes were founded near the university, so the neighbourhood was called Surgeons’ Square. It was an era when a couple of powerful and respected families dominated the research. They had a insatiable need for ‘fresh’ skeletons, a demand that was easily met. Professional murderers like Burke and Hare (picture) proved to be more than able to fulfill the needs of Britain’s medical schools.