Putin’s letter may mark the end of American hegemony

14 September 2013 by Jan Huisman in Scrutinized - No Comments 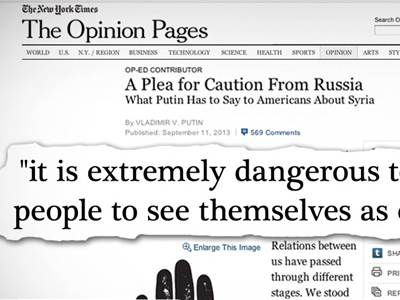 At first sight Putin’s letter in the New York Times criticizes America’s meddling in the affairs of sovereign countries. Closer reading shows that the writing is meant as an eye-opener for the American public, to show a truth they will not like: that the era of America’s hegemony has ended.

The letter itself is a masterpiece of international statesmanship. After Putin precluded the attack on Syria itself by persuading the country to co-operate with the United Nations, he reached out at the American public itself, pleading for the constructive support of the United Nations as the international problem solver. A role that the United States of America has represented for decades, especially since the Soviet Union ceased to exist in the early nineties. After the end of the Cold War, the Pax Americana continued, with economic and military domination of the United States of America set out all over the globe. With liberal standards accounting to everyone, historian Francis Fukayama stated that history had ended, while liberal democracy would be universal. America, as the ‘police man of the world’ insured peace and stability. After more than a decade of relative peace (and a more or less successful intervention in the war that followed the disintegration of Yugoslavia), the attack by Al-Qaida on the United States marked the end of America’s foreign policy of forging broad coalitions in consent with the United Nations. As a beleaguered state, the Bush administration started to lash out at far away foreign countries on ambiguous grounds, the broad American public believing that their security was at stake. Several nations were invaded, like Iraq, Afghanistan and more recently Libya. The United Nations were either mislead or ignored.

As in 1987 historian Paul Kennedy stated that all world empires ended because they overstretched, it was difficult to imagine America would expand beyond its military and economic capabilities. But with the financially disastrous wars with Iraq and Afghanistan in mind and the worldwide economic crisis that crippled the economic power of the West since 2008, the theory of Imperial Overstretch came back with a vengeance. Other world players, most notably China and Russia, emerged with staggering rates of economic growth and a mounting influence on the scene of world politics. Putin’s letter marks the end of an era. As he states it, it is time for Americans themselves to accept they are not exceptional: “‘There are big countries and small countries, rich and poor .. We are all different, but when we ask for the Lord’s blessings, we must not forget that God created us equal.” Putin’s plea to accept the United Nations as the worlds leading power cannot be misread: Americans should get used to the fact that their undisputed hegemony has ended.