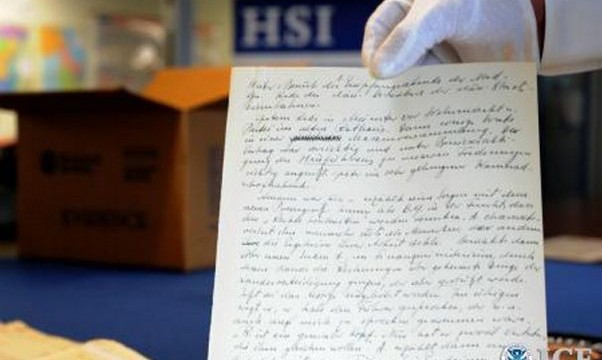 On the 13th of June the long lost diaries of Alfred Rosenberg (1893-1946) were revealed. What may be unveiled in the 400 pages of Rosenberg’s gift to posterity?

The finding of the diary is a real treat for historians while the debates on the Second World War are undiminished. Still, the diaries are ‘only’ from Rosenberg: Although he was the main party-ideologist and Reich-minister of the occupied Eastern Territories, he was seen by contemporary rivals and modern historians alike as a ‘pretentious fool‘. Nonetheless, the rediscovered diaries of Rosenberg can be very interesting to historians. After all, the Estonian-born Rosenberg may be considered grotesque figure, he was in Hitlers ‘inner circle’ and his party-membership dated to the early days of the NSDAP, in 1919: even before Hitler.

First of all, let’s have a look on the issues where Rosenberg’s dairies could shed light on. His recollections cover the time span from spring 1936 to 1944. During this period, the Nazi’s started the Holocaust, stole art throughout Europe and invaded Russia and tried to exterminate its population. Rosenberg spheres of influence all cover to some extend these major events. He was the main Nazi-ideologue and wrote the influential book Mythos des 20. jahrhundert (1930), a strongly racist and antisemitic account that was read throughout the Third Reich and even is said to have influenced Hitler himself. It is a long lasting debate how big Rosenberg’s influence actually was; at least we now have his own account on the matter. After the breakout of the war, his ideological influence stayed strong, most of all on the perception of the Soviet union. As a born Estonian (who fought against the communists in his youth), Rosenberg’s ideas on the Soviet union were quickly accepted as the view of an expert. As such, the way countries in ‘the East’ were treated the way they did, was influenced by Rosenberg. To what extend may become clearer after publication of the diary. Furthermore, Rosenberg played a major role in the stealing of art in all occupied territories. The task force was even called ‘Rosenberg’, which stripped all art in Jewish possession they could get there hands on. Although the stealing of art is not that much debated nowadays by historians, the publicity when the stolen art is being returned to their Jewish owners or their heirs is huge (like the Goudstikker collection and the paintings of Gustav Klimt). Rosenberg’s accounts could be of aid to these families, and may help to clarify the issues to the larger public.

Although we have to wait for the publication of the diaries, the US government already made a first examination and stated that the diary may contradict present views on the Third Reich. It is not clear which views they mean, but one particular event was noted: the crisis that emerged after the flight of Rudolf Hess to England in 1941. Hess was the main Nazi after Hitler in the day and flew to England, but flew to England to open up peace talks on the 10th of May. His plane crashed and he was arrested at the spot. No peace was discussed and Hitler declared that Hess was insane. About a month later, Germany invaded Russia. This flight of Hess and its interpretation and consequences is still a heavily debated issue among historians. Did Hess had Hitlers backup for his peace request? And what game was played by the British secret agency? Most of all, could the disastrous war between Russia and Germany have been avoided? Rosenberg, as extreme anti-communist, surely had his opinion on the matter in this tensed month of May.

Up until now, no new acknowledgments were made after study of this document. In fact, as Michael Collin Piper explains on American Free Press, the media buzz was a bit overdone in the first place.