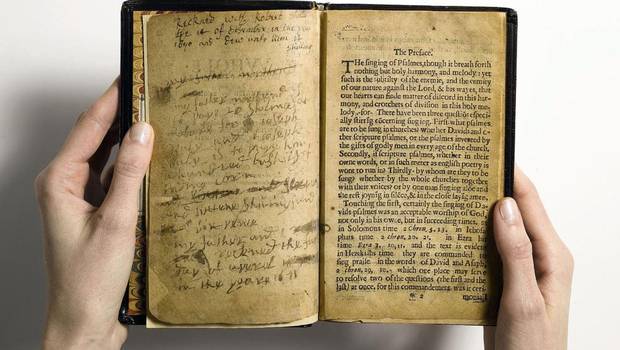 World’s most expensive book was sold on Tuesday for a whopping $14 million at an auction of Sotheby’s, New York.It is a translation of Biblical Psalms, printed by settlers who came to America around 1640. It is the oldest book ever printed in the USA, but the true value lies in its historical background.

The Puritans fled from England when the reign of Mary, Queen of Scots began in 1553. The catholic queen denounced and persecuted all Protestant movements. They left England for the Netherland and the American colonies (New England). Because these Protestans were often called ‘Precisemen’, they soon were called Puritans, especially in New England. The Puritans wanted to be independent from English catholic beliefs and they made their own translations of the Old Testament. They printed their own bibles, like the one sold on Tuesday. With this own bibles, New England declared their religious independence from the Church of England – paving the road to the American revolutionary war (1775-1783).  Their are only eleven original bibles of the 1640-edition left, and they are regarded as one of the most important artefacts off American history.

More information on: The Globe and Mail

Gun-ownership wouldn't have prevented the Holocaust