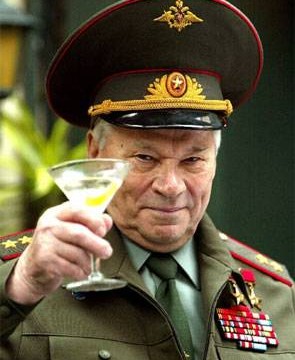 The AK-47 rifle is famous for its use in the Russian army and later as a weapon of choice for terrorist and freedom fighters alike. In many third world countries, the gun has become a symbol for rebel fighters. It is the only weapon that’s depicted on a country flag (Mozambique). The weapon is the most widely used firearm in the world with an estimated 75 million in circulation. The Russian Mikhail Kalashnikov designed the AK-47 Kalashnikov rifle.

Mikhail Kalashnikov deceased today at 94 years, in a hospital in his hometown Izhevsk. Kalashnikov served in the Russian Army, initially as a tank commander. When he was hospitalized during the Second World War, he heard his fellow soldiers complain about the quality of the Soviet Rifles. Therefore, he designed his first machine gun in a hospital bed. It was only after the war that he designed his most famous model, the “Avtomat Kalashnikova model 1947”.