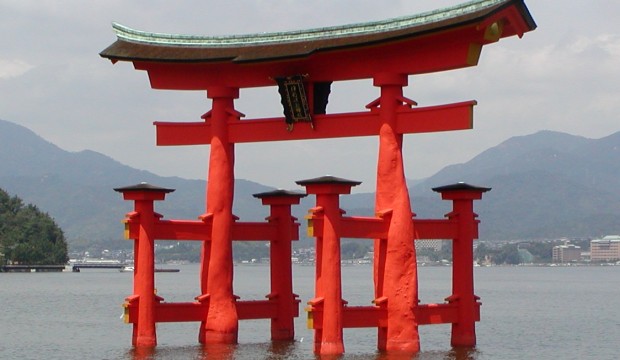 On December 15th, 1945, Japan abolished Shinto religion on American instigation. They regarded the ancient Shinto religion as an important part of Japanese nationalism and militarism – both foundations of the aggressive expansionist policy of imperial Japan in the first half of the 20th century.

Shintoism is an old religion, dating back to the early 8th century, and originated in Japan. Shintoist worship nature gods, living in objects such as stones, the moon and the sun. Shinto was and is primarily practiced in Japan and has some similarities with Buddhism. Shinto is deeply embedded in the Japanese culture, and many of its rituals are still in use in Japan today.

How this tranquil spiritual movement became a driving force for the excessive violent militaristic expansion is still a much debated issue in Japan. Fact is, Shintoism had a strong nationalist following. They believed the emperor descended from the gods. The Japanese emperor was thus regarded as the epitome of purity and goodness and therefore, Japan had the right, even the duty, to rule. Somehow, the Japanese created their own version of the ‘Übermensch’, the German idea of race-superiority. The Shinto-religion thus gave Japan a justification to conquer and occupy neighboring countries.

After the surrender of Japan on September 2nd, 1945, several decrees were issued under American pressure to impose a change in Japanese culture. State religion, Shinto, was eliminated, and church and state were separated. Although the Japanese emperor could stay in office – to prevent a massive uprising of the beaten Japanese people – the new law prohibited the imperial worship and the emperor’s influence on politics.

Nowadays, Shinto still one of the biggest religions in Japan. Some want to restore Shinto as a state religion to counter juvenile rebellion against traditional ways of life. Even Abe, the prime minister, is a protagonist of the re-institution of state-Shintoism and the imperial worship.