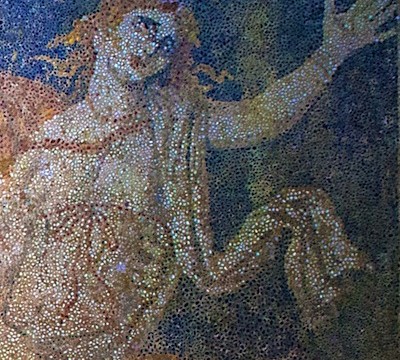 A stunning mosaic of Persephone is discovered at the site of the newly excavated Amphipolis tomb. Earlier this week (DisputedPast reported) images from the other part of the mosaic were released by the Greek ministry of Culture. The mosaic is now fully uncovered and it can be interpret as a whole.

The female figure, whom archaeologists have identified as Persephone, has fiery red hair, cloaked in a white robe fastened together with a red ribbon. She raises her hand in a frantic gesture. Archaeologists are certain that the mosaic shows the abduction of Persephone by Pluto. The bearded crowned man depicts Pluto (not the tomb owner as was thought) and the man in the Chariot is Hermes.

The depiction of the abduction of Persephone is common theme in Hellenistic art.