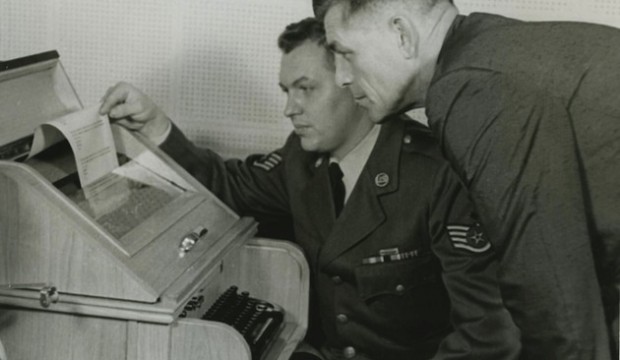 As Edward Snowden showed the world to what extent the American National Security Agency has been tracking emails and phone-calls, a worldwide public outcry for more privacy protection followed. It is likely that most political leaders (friend or foe) were surveyed by the NSA’s Prism Program, as were all major companies. Moreover, public websites, like mail-services and social networks, are infiltrated as well. Some figures estimate over 1 billion people are surveyed by the NSA worldwide. Even America’s minister of Foreign Affairs, John Kerry, stated that U.S. surveillance ‘has gone too far‘. Although many are appalled by the revelations made by Snowden, history shows us that secret services will always use the latest and most sophisticated techniques to get information. In fact, the NSA itself has been entangled in major espionage scandals in the twentieth century.

Just after the Second World War, in August 1945, the NSA started project Shamrock. All telegraphic data that entered and left the U.S. was surveyed and the NSA. If a telegram looked interesting, it was intercepted and handed over other intelligence agencies like the CIA and the FBI. At the height of the project more than 150,000 messages were analyzed every month. The U.S. government had not authorized permission to perform these actions. Only after the Congress started an investigation in May 1975 the program was exposed and it was terminated. Senator Frank Church later stated that the Shamrock project was ‘probably the largest government interception program affecting Americans ever undertaken’.

Spying on the famous: Project MINARET

Another spy program was started by the NSA in 1967, codename MINARET. This project surveyed a listed of selected individuals, American citizens and foreigners alike. Their electronic communications were tapped. Many prominent Americans were on this list, including civil rights activist Martin Luther King and boxer Muhammad Ali – mainly because they criticized the Vietnam War. Especially journalists were target. The U.S. President, Lyndon Johnson, was particularly interested in their possible links with foreign governments. In total 5,920 foreigners and 1,690 U.S. citizens and organizations were spied upon. Again, no permission was given by the U.S. government. The project was terminated in 1973.

After these eavesdropping scandals were made public in 1978, the U.S. government introduced the Foreign Intelligence Surveillance Act to keep the NSA in check. But after 9/11, the law was eased repeatedly. Furthermore, history shows that the NSA (or any other secret service) will ‘bend’ the law to achieve its goals. Even more so, while governments heavily invest in their agencies and support their aims. Only when a secret program is made public it is reluctantly terminated: Without Snowden the PRISM-project would still be unheard of. With the ever-growing technological capabilities, don’t expect secret services to stop large-scale eavesdropping soon.