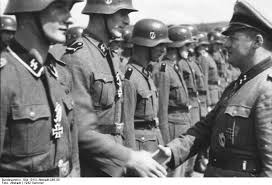 The notorious Waffem-SS continued their military activities after the Second World War. They built on a secret army in West Germany, starting in 1949. Their aim was to fight off a Russian invasion. Since Germany wasn’t allowed to have an army, they wanted to filled the gap left by the demise of the Wehrmacht. At first without acknowledgement of the German government, but as chancellor Konrad Adenauer found out about the secret army in 1951, he didn’t object.

Some 2000 veterans from the Waffen-SS were ready to fight against the Russians. To acquire the necessary weapons, the SS-veterans contacted police and border patrol. They made plans to train the SS army in fascist Spain. Moreover, leftist West Germans were mapped, so they could easily be killed or captured in case of a war.