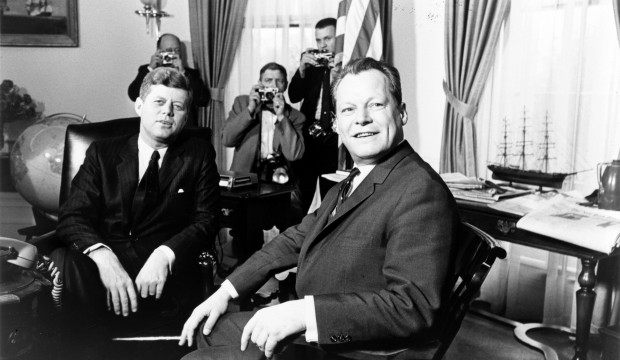 As mayor of West Berlin, as Foreign Minister and as Chancellor of Germany, Willy Brandt (1913-1992) changed the Federal Republic of Germany (BDR) like no other politician.

Brandt was born in Lübeck on the 18th of December 1913 as an illegitimate child by the name of Herbert Ernst Karl Frahm. The name under which he was known around the world, Willy Brandt, he had given himself as a young man for his socialist splinter party, formed in January 1933 as an underground movement in opposition to Hitler. He was soon exiled to Oslo, Norway, to escape nazi-repression. As a ‘minority German’ Brandt spent his early adult life in Scandinavia until the end of the Second World War. He didn’t seem to be fit for a political career in Germany afterwards. But he took the highest office of the BDR from 1969-1974 and was a major political force in West-Germany up until his death in 1992.

Two lives are the ones who make Brandt Biography. The first founds in the Weimar Republic, it led him into exile in Oslo. The second is his after-war life, as a mayor of the divided Berlin, as Foreign Minister, Chancellor and Chairman of the SPD from 1964 to 1987, he has changed the German policy and the image of the Federal Republic in the world. Especially the Eastern and détente had a decisive influence. He embodied the first social-liberal coalition (1969-1972). This period is marked by Historians as one of reorganization of the Republic and of the social-democracy of Germany.

Adored by some, but feared and even hated by others, Brandt polarized Germany like no other. He changed political sides several times. As Berlin’s mayor, Brandt was notorious for his anti-communist rhetoric. Afterwards, during the early years of the Republic, he took a more relaxed stance towards the communist DDR. In 1972 he signed the extremist decision which was felt by the young generation as distrust policy towards them. Multiple times Brandt had to reinvent itself in his life.