19 February 2014 by Jan Huisman in Scrutinized - No Comments 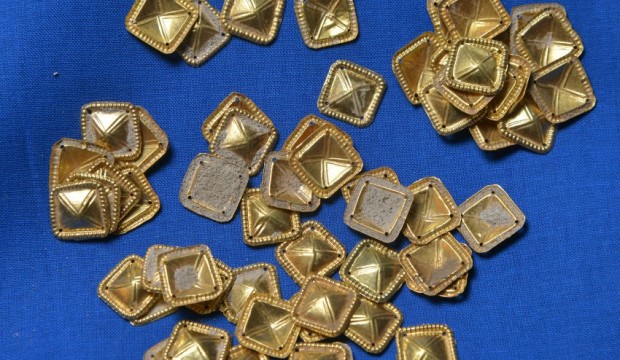 An amateur archaeologist looted an early medieval treasure site last week (DisputedPast reported). Officials of the German state Rhineland-Palantinate showed the treasure yesterday. Given the value of the precious golden and silver objects, it is easy to understand why the finder was reluctant to deliver the goods to the authorities. Fine golden ornaments, silver cutlery and other golden and silver-plated objects dating from the 4th or 5th century AD are just some of the objects that make up the treasure. The man – he is subject to a police investigation – discovered the site with the help of a metal detector, while he was on an illegal treasure hunt near Germersheim in the Rhineland-Palatinate. He secretly dug up the treasure, destroying the historical context in the meantime. Afterwards he covered up the site with leaves and branches. How the authorities knew the treasure was found, isn’t made public. Fact is, the Rhineland-Palantinate Ministry of Culture complains about increasing looting-activities by amateur archaeologists. 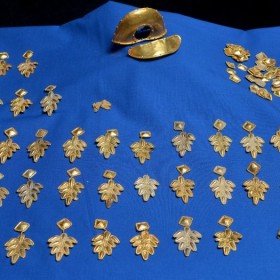 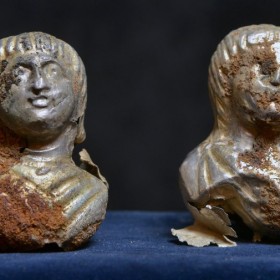 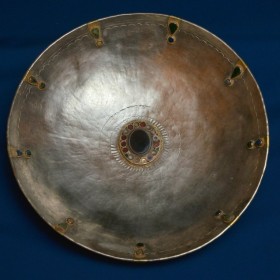 A valuable treasure of an important owner

The historical context of the site is destroyed, but the treasure itself is still very interesting. Both the quantity and quality of the objects lead to speculation: Some suggest that this could be the legendary Nibelungen treasure, from the like-named saga. By all means, the splendor and style of this treasure is astonishing. Experts estimate the value at more than one million euros. Its late antique or early medieval owner surely was a very rich and likely very important person, albeit his ethnic background is uncertain. He, assuming he was a man, could be a Roman, a Frank or even a Hun.

The late antique era was, to say the least, tumultuous. The limes, the fortified border of the Roman Empire in northwest-Europe, was crumbling under the mounting pressure of Germanic tribes from the 4th century AD onward. The Rhine-Palantina area, with its important Roman city Trier, repelled several attacks until the Franks took the city around 413. In 451, the Huns conquered the region, but a couple of decades later the Franks regained control. This age of violence had a huge impact on the population: the population of Trier declined, from an estimated 80,000 in the 4th century to 5,000 at the beginning of the 6th century.

In this age of violence, with a collapsing Roman empire and warring Germanic tribes, no one was safe. Maybe a Roman top official hastily buried his valuables while fleeing from invading Franks. But it is as likely that a highly ranked Hun hid his loot in anticipation for the Frankish onslaught. Sadly, due to the destruction of the finding site, it is even harder to derive the origins of the treasure.

Carbon-dating on Shroud of Turin maybe wrong, due to an earthquake